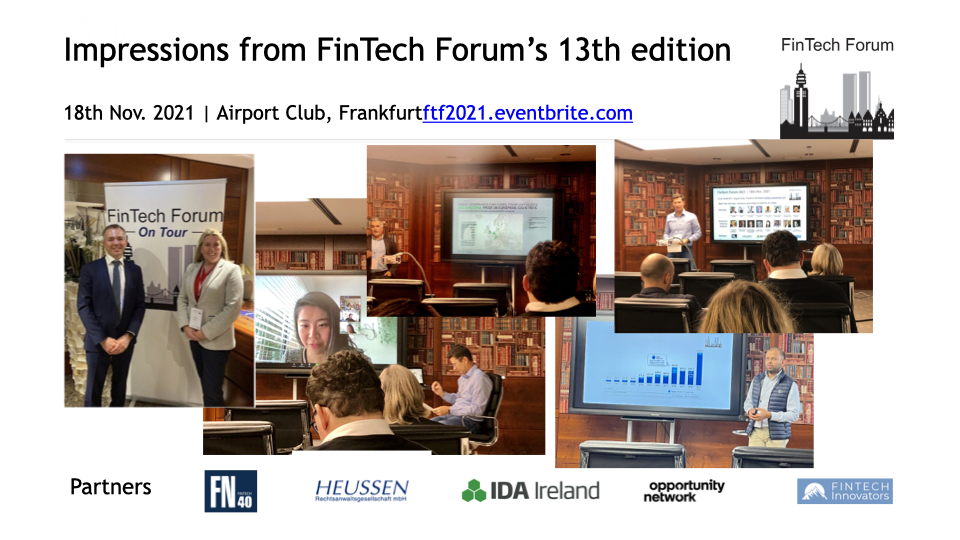 Check out the 2nd edition of Scaling Enterprise FinTech | The Handbook, launched in partnership with Money20/20 and SixThirty Ventures is out: http://www.fintechforum.de/sef/

If you are an early stage startup in Europe building the next big thing in FinTech, reach out to Frank Schwab or Samarth Shekhar.

Kicking off with a networking lunch, the event – streamed digitally to participants who could not make it in person – started with Samarth Shekhar, Co-Founder of FinTech Forum, summarising the European FinTech scene’s record funding volumes and deals of note this year. This was followed by the first round of startup presentations (Aazzur, aisot, ALLINDEX and Delega – check out the “startups in a tweet” below). David Schaeffler from Hannover Digital Investments / Talanx and Cynthia Nadal of SeedX Liechtenstein covered the trends to watch in InsurTech and FinTech respectively.
Daragh Hanratty of IDA Ireland provided an overview of how Ireland’s agencies can help leading FinTechs and financial institutions scale, following which we made time for a short coffee break.
The 2nd round of startup presentations (QuickCashAI, Insaas.ai, Vermögensheld and Wequity) set the scene for some interesting discussions around ESG for startups and VC firms to follow.
Ertan Can from Multiple Capital shared a fascinating account of his journey setting up one of the first European Fund of Funds, which has invested into 500 ventures via 30 micro VC funds across Europe and the US.

1. Please tell us a bit about yourself, both at work and leisure.

I am VP for financial Services with IDA Ireland, the state agency responsible for FDI into Ireland. I am based in Frankfurt, have a keen interest in fitness and travel. During lockdown I took up running. I am currently working to improve my times for 5km and 10km park runs

7 Questions with Philipp Buschmann of AAZZUR

1. Please tell us a bit about yourself, both at work and leisure.

I am an entrepreneur, a husband and passionate about fintech. At my first job at Razorfish I helped build trading tech for State Street Bank; as a strategy consultant I helped design the portal for online banking at Sparkasse and as an entrepreneur have helped lenders and challenger banks get launched.
My personal passion is cooking and snowboarding. One is good for the head (almost like a meditation) and the other is good at enjoyment and hurting myself on the slopes. These I think are natural Austrian hobbies: eat, drink and ski!

Zilch, a London-based buy now, pay later (BNPL) Fintech, has closed on a $110 million services C funding round at a $2 billion valuation. Zilch last raised money in 2020 at a valuation of “just” $500 million. Zilch is claiming the title of the fastest European company to earn unicorn status. Zilch states that it has “leapfrogged” other high-flying firms to become a double unicorn in just 14 months, faster than any other in the European Union. Zilch says its growth is “unparalleled within the BNPL industry” having increased by 8X since this past March.
The funding round was led by Ventura Capital and Gauss Ventures with numerous other new investors and existing investors participating in the round.
https://www.crowdfundinsider.com/2021/11/182760-bnpl-zilch-claims-title-of-fastest-fintech-to-gain-unicorn-status-raises-110-million-series-c-at-2-billion-valuation/
Founded in 2012, London based Ventura Capital provides investors with exposure to disruptive consumer technology companies that are growing exponentially and approaching IPO. To date, the firm has invested over $750m in 23 pre-IPO companies including Spotify, Paytm, Delos, and Lyft, delivering high returns and building a strong reputation for ‘picking winners’ on behalf of its investors.

British VC firm Balderton Capital, known for backing companies such as Revolut and Depop, has raised its largest early-stage fund ever.
The firm says it will deploy the $600m into 25-30 new companies in the region and is sector agnostic. The average cheque size will be between $1m-$20m.
Balderton has historically been known as one of Europe’s most prolific Series A investors, but has transitioned to a multistage strategy, launching its first later-stage fund earlier this year. The firm has also historically invested opportunistically at the seed stage. (Revolt was a late-seed/early A deal.)