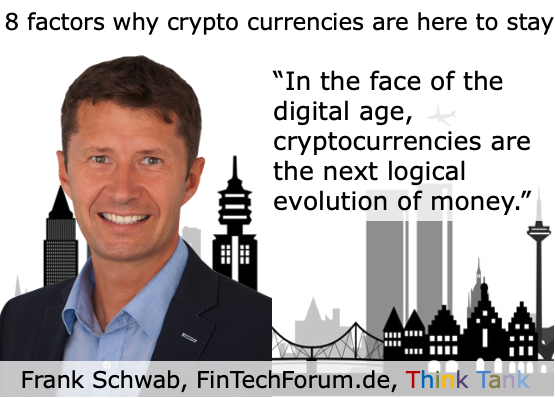 User numbers and investments in cryptocurrencies and blockchain projects are increasing. In the Swiss Crypto Valley, 800 companies with 4000 employees are working on the digitalization of assets. The regulators are also taking up the issue. In the digital age, cryptocurrencies are the next logical stage in the development of money.

The cryptocurrency market capitalization has doubled in the past 12 months, while the volume increased fivefold from $20bn to $100bn.

While the number of cryptocurrency transactions grew rapidly in the first years, the growth did slow down in 2019. Today we can observe 350,000 ETH transactions and 650,000 BTC a day.

On the website stateofthedapps.com you can follow how the number of crypto and blockchain applications increasing every month.

2. The Crypto Valley and investments made

In the Swiss Crypto Valley alone, 800 companies with 4,000 employees are working on blockchain applications and the digitisation of assets.

With over 400 registered companies, including several unicorns, the canton of Zug is the heart of the «Crypto Valley». Other centres are Zurich with 138 companies, Geneva (45), Ticino (43) and Vaud (26). 42 companies are registered in the neighbouring country of Liechtenstein.

More than $10bn has been invested in the very young blockchain and crypto industry since 2013.

The investments and hubs, such as the Swiss Crypto Valley, are key drivers for the future of blockchain and cryptocurrencies.

In May 2019, Burkhard Balz, Board of the Deutsche Bundesbank, said:

„Money is central to us. Money and all forms of transferring money are our core business.“

“One in 10 central banks surveyed in 2019 said they were likely to offer digital currencies within the next three years, covering about 20% of the world’s population.”

The Bank of Canada, the Bank of England, the Bank of Japan, the European Central Bank, the Sveriges Riksbank and the Swiss National Bank, together with the Bank for International Settlements (BIS), have recently created a group to share experience as they assess the potential cases for central bank digital currency (CBDC) in their home jurisdictions.

There are increasingly clear governmental rules for cryptocurrencies around the world.

Tools for investors are also becoming more professional. For example, with “WeissCryptoRatings” there is now an established and professional rating agency for cryptocurrencies.

Overall, it can be said that cryptocurrencies are being accepted more and more and that clear rules are gradually being put in place.

The Economist recently published a detailed article with the following thesis:

“America’s aggressive use of sanctions endangers the dollar’s reign”

The underlying arguments have meaning.

Most recently, Russia has been busy de-dollarising parts of its financial system. Since 2013 its central bank has cut the dollar share of its foreign-exchange reserves from over 40% to 24%. Elvira Nabiullina, Russia’s central-bank governor, says

“We are gradually moving towards a more multi-currency international monetary system.”

ING expects 62% of Russia’s goods and services exports to have been settled in dollars in 2019, down from 80% in 2013.  Its trade with China was almost all in dollars in 2013; now less than half is. And Xi Jinping and Vladimir Putin said they would expand settlement of bilateral trade in their own currencies.

On the sidelines of a recent summit, leaders from Iran, Malaysia, Turkey and Qatar proposed using cryptocurrencies, national currencies, gold and barter for trade.

Britain, France and Germany, with the EU commission’s support, launched INSTEX. INSTEX is essentially a barter mechanism that allows firms to engage in commerce without resorting to the dollar or SWIFT.

China, India and others may be exploring a jointly run SWIFT alternative.

And Mark Carney, the governor of the Bank of England, says that the dollar-centric system “won’t hold”.

Consequently, the international importance of the dollar is declining.

5. In the face of the digital age, cryptocurrencies are the next logical evolution of money

Whether shells, salt or stone money, people need something that symbolizes a lasting value and is suitable as a means of exchange for business.

The gold coin “Aureus” from the year 82 BC established the first money standard.

The first paper money was issued in the western Chinese city of Chengdu in the early Northern Song Dynasty (960-1127). Because coins had become scarce, paper money was used as emergency money to finance a war.

Satoshi Nakamoto’s Bitcoin White Paper was featured on a 2008 cryptography mailing list and the first 50 bitcoins were generated on January 3, 2009.

It is obvious: money is changing-and in the face of the digital age, cryptocurrencies are the next logical evolution of money.

6. Burning man and the desire for freedom

„The only way to ultimately save civilization will be to deprive governments of their power over money. The current instability of the market economy is a consequence of the fact that the most important regulator of the market mechanism, money, has been excluded from regulation by the market process.“

The idea behind “Less State” is also a driving force behind the annual “Burning Man” festival in the Black Rock Desert in Nevada, USA. The nine-day festival of artists, entrepreneurs and self-performers of all kinds now has 75,000 participants. The special thing about it: during the festival, a temporary city, including a hospital and an airport, will be created in the desert, which will be completely dismantled afterwards. The highlight and conclusion of the festival is the burning of the oversized “Burning Man”, a man up to 30 meters tall.

“BITNATION” and “Liberland” are two other examples of the use of blockchain technologies and cryptocurrencies with regard to self-determination and independence from traditional state order.

Bitnation was founded July 14, 2014 by Susanne Tarkowski Tempelhof. Its purpose is to “free humankind from the oppression and sanction of pooled sovereignty, geographical apartheid and the xenophobia and violence that is nurtured by the Nation State oligopoly.”

The technology underlying most cryptocurrencies is based on the blockchain.

Important to know: In the context of the decentralization and encryption of the blockchain, cryptocurrencies play an integral, inseparable role.

While trust in banks has declined in recent decades, trust in new technologies has increased. Blockchain technology has meanwhile managed to entrust several million people worldwide with a total of more than 250 billion euros- a trend on the rise.

“Smart Contracts” are a further development of the blockchain. These are programmable contracts that come into effect when certain events occur.

There are now many hundreds of applications in a wide variety of industries. For example, the energy industry is experimenting with smart contracts to enable a more direct exchange between decentralized energy producers and consumers. The automotive industry is researching wallets for their cars so that petrol, electricity and parking tickets can be paid for automatically. And in the financial industry, for example, automatic dividend payments depending on certain financial indicators are easy to imagine.

Let’s stay in the automotive industry for now. Jaguar Land Rover plans to reward car drivers sharing their data with IOTA crypto currency tokens. The data for which Jaguar Land Rover would pay includes information about traffic congestion or potholes. There should also be a reward when drivers provide their vehicles for car sharing services. The earned IOTA tokens could then be used to pay fines, parking tickets or – in electric cars – for the recharging of batteries.

Maybe “steemit.com” will replace Facebook in the future. Difficult to imagine? – But in any case, steemit would be the fairer social media platform. Because as a steemit content creator you get “STEEM” from your readers. STEEM is a cryptocurrency. A STEEM is currently worth around $ 0.17 and can be exchanged on several crypto exchanges. It is not uncommon for an author to receive more than $ 100 for a contribution shared on steemit. Currently a platform for nerds from the crypto scene, maybe a successful, global social media platform in a few years- bloggers, influencers, photographers, scientists and others who publish a lot and often would be happy.

Another remarkable application in connection with IOTA- the Taiwanese startup Lidbot from the waste management sector has developed an intelligent sensor in collaboration with IOTA that collects data within a waste management system. The sensor measures the distance from the lid to the bottom and can thus make any garbage can or container an intelligent device in the IOTA ecosystem. Within an “intelligent city”, disposal companies can be notified as soon as garbage bins are full, saving resources, time and money.

In this way, IOTA is striving to become the leading cryptocurrency for machine-to-machine payments and has entered into partnerships from various industries worldwide.

In the financial industry, blockchain can be used to significantly optimize many paper-based processes, especially in international and cross-border banking. An obvious area is trade finance. Basically, you can expect cost savings of over 30 percent. In addition, new banking markets, products and services are emerging, such as the cryptocurrency investment products from Frankfurt’s ICONIC HOLDING or the combined cryptocurrency bank account of the Berlin startup Bitwala.