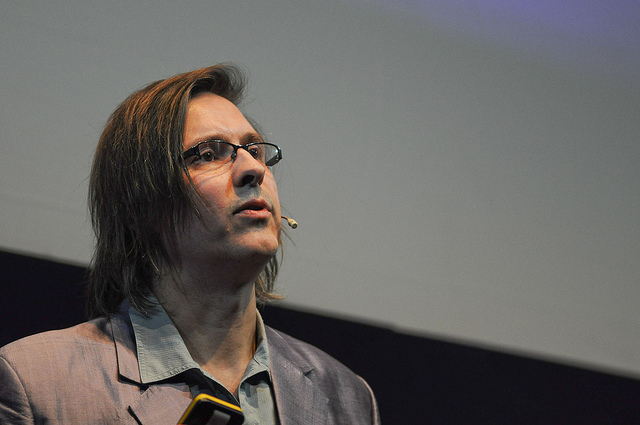 I’m Simon Redfern, programmer, composer, CEO of TESOBE (an agile web / mobile agency based in Berlin) and founder of the Open Bank Project. I started programming 32 years ago, and have worked on database driven web applications since 1996.  During this time I’ve gained deep hands-on experience in web application, database and operating system technologies. Shortly after I arrived in Berlin in 2004 I had the idea of more open banking via APIs (Application Programming Interfaces).

2. Which services do you sell and who are your competitors?

We help banks stay relevant in today’s digital world by accelerating their transition into platforms. To do that, we’ve developed an open source API and App store for banks that empowers them to securely and rapidly enhance their digital offerings using an ecosystem of 3rd party applications and services.

Yodlee has been the historical player in this field. Unfortunately, they do not serve the DACH market and they dis-intermediate banks because they need to store user authentication credentials which takes users away from the bank’s home page. Credit Agricole, the largest retail bank in France, launched its own proprietary API some months ago. Our aims are similar but we strive to be an open standard, interoperable across banks. Our technology is dual licensed under open source and commercial licenses.

I got the idea when I was thinking about corruption and fraud – and about how a new type of bank could help! For instance, foreign aid could be sent to an open bank account where the public could comment and tag the transactions. Or a small business could use an open bank account to better integrate with its ERP system. Such a bank account would need an API so that application developers could easily connect to it. Why not allow all bank accounts to have such an API?

We have been bootstrapping for the last couple of years and are now seeking to raise our first seed round. We offer commercial licences, community building and maintenance to banks adopting our API technology.

4. What were the biggest challenges in starting?

Dealing with banks is challenging because they are large and cautious organisations operating in a highly regulated and secure environment – and they rely on complex legacy technical systems.

Also, banks are like countries; in that they contain a huge number of different people. For a small company, finding a way “in” is only the first step because many technical and business stakeholders need to be convinced before something new is adopted. Someone said that banks are like oil tankers – they are slow to change direction.

But our ideas are getting more and more traction. Someone working in the innovation department of a major bank said that its now a question of “how and when” rather than “if” banks will adopt APIs. We believe they will use the Open Bank Project API!

5. What areas within FinTech do you personally find most interesting and why?

The FinTech industry in general is ripe for disruption. Banks are sitting on a treasure trove of data and services that could be better leveraged by engaging external and trusted innovators like Google, Twitter, Amazon and Facebook have done. By lowering the technical and financial barriers to entry, we will see a whole new class of innovative financial applications and services emerging.

Personally I’m interested in how greater transparency – or a sliding scale of financial visibility – can help. For instance our Social Finance application provides greater real time visibility on bank accounts. Also the Singing Bank I created serves to demonstrate that unexpected things can happen when an API is exposed: it makes music out of your financial transactions!

6. What opportunities do you see for FinTech startups in the DACH region, and how can we help to accelerate it?

The German market is very interesting. In the UK, 5 private banks dominate 85% of the retail market. On the contrary, with more than 3000 financial institutions, the german market is very diverse and fragmented. This is both an opportunity and a challenge. Germany also has HBCI, a legacy API which is difficult to use but at least it exists! We and other companies are beginning to leverage this API and build more modern platforms and services and APIs on top of it.

Banks are under pressure to reduce costs and innovate faster whilst still remaining secure. We believe fintech startups such as ourselves have an important role to play in this and we’d like to see more DACH region startups connect to our API so we can introduce them to banks both here and abroad.

7. What tip would you like to give FinTech entrepreneurs?

Keep it simple, share your ideas and products as soon as you can and then iterate quickly. Make it work, make it right, make it fast – and above all make it fun!